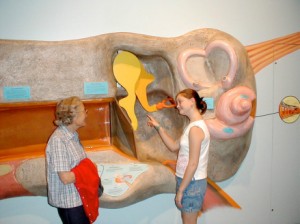 This was the first exhibit in the world dedicated to noise-induced hearing loss and tinnitus prevention.  OMSI has as many as 600,000 visitors a year and most of them visited the Dangerous Decibels exhibit while there.

After the exhibit closed in 2011, the giant ear remains in place at the museum.  Other components were refurbished and have been sold to other museums and theme parts such as Duluth Minnesota and Indonesia.

The exhibit components included a ten-foot tall walk-through ear, which was specifically suggested by focus groups of students in 6th through 8th grades. In this part of the exhibit, visitors activated a sound source and observe how the parts of the ear work together with the brain to enable us to hear.

Our research on the effectiveness of the museum exhibit showed us that it was a useful adjunct to our other noise-induced hearing loss and tinnitus prevention efforts at changing knowledge, attitudes, and behaviors regarding sound exposure and appropriate use of hearing protection strategies in children.

Many of the other components of the exhibit were interactive and are now available as part of our Virtual Exhibit, Here are some of components included: 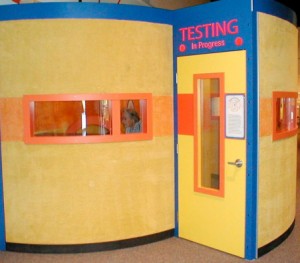 An interactive computer game in a hearing screening booth. Here, visitors could test their hearing by listening to a series of tones, and pressing a button to indicate that they heard the tone, and in which ear they heard it. They could also participate in a voluntary research study conducted by Oregon Health Sciences University that recorded the results and some demographical information about the visitor.

The data from the Listen Up! exhibit research study will be available soon to view and interact with »

A pair of telephones the visitors used together to experience different levels of hearing loss and/or tinnitus. 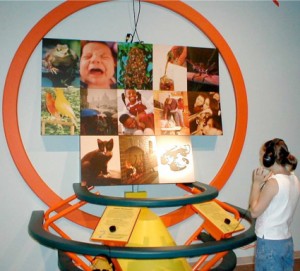 Two headphones and a source of recorded sounds. Visitors listened to the sounds and tried to guess the source first with, then without, simulated hearing loss. Images of sound sources lit up to indicate the actual source of the “mystery” sound. (see our web-based version of this game- Virtual Exhibit.

An interactive, networked computer game for 1-4 players in which visitors tested their knowledge and answered a series of multiple choice questions about hearing, the ear, and hearing conservation. See our web-based version of this game

A computer-generated animated video fly-through of the ear structures, with a focus on the role of hair cells. Visitors saw how hair cells respond to “safe” sounds, then saw what happens with “dangerous decibels.” The video also showed real hair cells responding to music.

A video game in which visitors distinguished between safe and dangerous sounds in scenes representing daily life, and used strategies to protect their ears from dangerous sounds to score points and save their hearing. See our web-based version of this game.

A game in which visitors explored the correlation between decibel levels and exposure times that can cause permanent damage. Players placed weighted icons of everyday sound sources on a scale, and an arrow pointed to the decibel level and amount of time that can pass before hearing is damaged from that sound source. Visitors could test each one and then line them up from safe to most dangerous, or in any order they choose. See our web-based version of this game ».

This computer-based game presented situations where the players decided what to do about protecting him/herself from loud sounds in the presence of friends. (see web-based version of this game).