by The IncrediBATs, First Lego League Team #5772 in Toledo, Ohio. 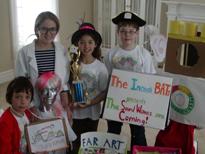 Jolene was born on November 7, 2010. Seven is a lucky number, but Jolene wasn’t very lucky when she almost got run over by our mini-van! The IncrediBATs also wrote a Mindstorms NXT program that calculates how long you can safely listen to an iPod at a certain sound level. 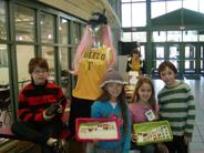 The IncrediBATs took Jolene to the University of Toledo Recreation Center. They tested twenty students’ iPods and had 75 students fill out surveys about how they use their iPods. The IncrediBATs also took Jolene to the Toledo Technology Academy and to a Toledo Symphony rehearsal. Jolene also attended the First Lego League Toledo Regional meet and the FLL Ohio Championship.

Below is a description of the IncrediBATs FLL research project. As part of their project the team produced a YouTube video titled “The Sound Waves are Coming”. (If you have trouble viewing this video, copy and paste the following link into your browser to see it  http://www.youtube.com/watch?v=1nLXCwzqkqE).
Stars of the youtube video are – Clay, Ella, and Zoe Countess and Evan Heritage of Toledo

According to a recent study, one in five teens has noise-induced hearing loss. Many teens don’t know or don’t care that they are at risk. Our solution is to get information about safe listening where it is needed – on kids’ iPods, and to make it cool to wear hearing protection. The IncrediBATs made a Hearing Survival Guide and iPod stickers and distributed these to teens and college students. They built Jolene, a mannequin equipped with a microphone and a decibel meter, and used Jolene to test students’ iPods. The IncrediBATs also created Ear-Art, designer earplugs that make hearing protection cool.

The team’s coach is Amy Heritage.