Hearing is a series of events in which sound waves in the air produce electrical signals and cause nerve impulses to be sent to the brain where they are interpreted as sound. The ear has three main parts: the outer, middle and inner ear. Sound waves enter through the outer ear and reach the middle ear where they cause the ear drum to vibrate. 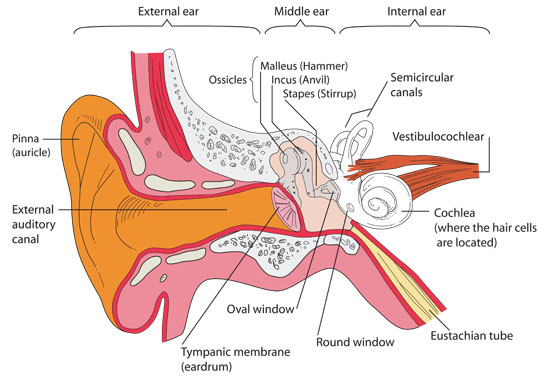 The vibrations are transmitted through three tiny bones in the middle ear, called the ossicles. These three bones are named the malleus, incus and stapes (and are also known as the hammer, anvil and stirrup). The ear drum and ossicles amplify the vibrations and carry them to the inner ear. The stirrup transmits the amplified vibrations through the oval window and into the fluid that fills the inner ear. The vibrations move through fluid in the snail-shaped hearing part of the inner ear (cochlea) that contains the hair cells. The fluid in the cochlea moves the top portion of the hair cells, called the hair bundle, which initiates the changes that lead to the production of the nerve impulses. These nerve impulses are carried to the brain where they are interpreted as sound. Different sounds move to the population of hair cells in different ways, thus allowing the brain to distinguish among various sounds, for example, different vowel and consonant sounds.